More identifiable objects from the girl who can’t draw a bagel! 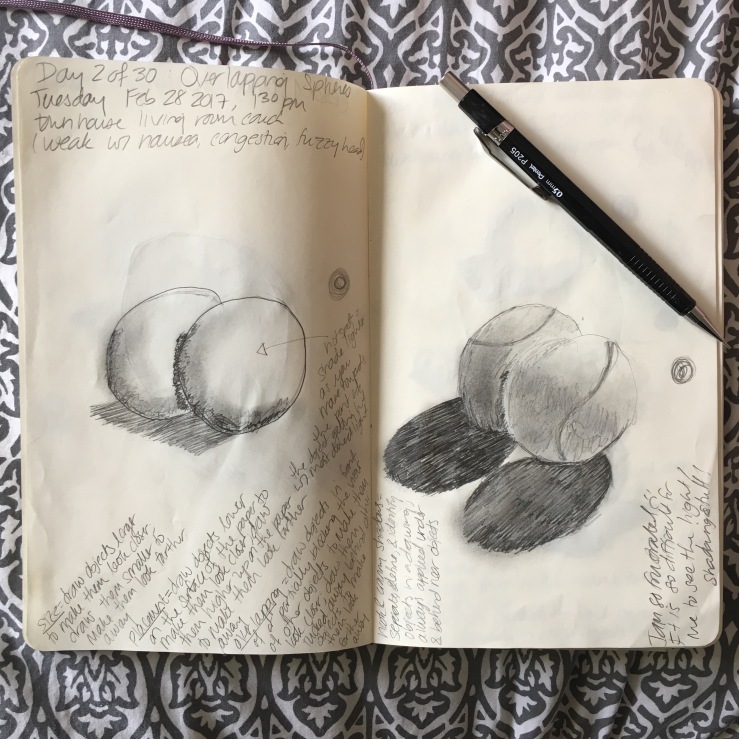 I’ve been wanting to learn how to draw for a long while but I’m BRILLIANT at coming up with excuses.  For example “I don’t have time in my schedule for a drawing class,” meanwhile I have plenty of time for a class to learn how to oil paint with knives.  My diagnosis of narcolepsy with cataplexy brought a medical explanation for why I don’t always have control over my muscles, and the profound realization that my reluctance to commit to drawing was my perceived incompetence at controlling my own limbs.

I experience a phenomenon that I call “morning hands”: when I wake up in the morning, I have no fine motor control in either of my hands.  My friends and family have done a great job of pretending this is totally normal, helping me open up something as simple as the quaker oats oatmeal container when I’m fumbling around, without asking any questions.  I also experience “morning hands” whenever I’m having intense emotions, ESPECIALLY laughter.

You know that feeling when you hit your funny bone and it hurts like hell and your arm gets weak and tingly?  Morning hands is kind of like that semi-uncomfortable numb, tingling sensation combined with an overwhelming weakness that I only hear other people describe after they’ve been at a climbing gym for 5 hours.  Except it happens probably 5 out of 7 mornings a week, and then multiple times throughout the day.

So it turns out that my elaborate excuses to avoid drawing stemmed from embarrassment and the subconscious fear that I can’t control my hands and I should be doing “better” than whatever it is I’m doing because all the doctors say I’m the picture of health.  As soon as I learned that “morning hands” were cataplectic episodes and not laziness / impulsiveness / immaturity / whatever-other-reason-people-stupidly-think-that-a-person-would-complain-about-spontaneously-losing-muscle-strength, I was cut free from the unrealistic standards I was holding myself to and – almost immediately – bought a drawing book.

I DO wish that it hadn’t taken “permission” via the diagnosis to draw with weak, shaky hands, but that’s for another day.