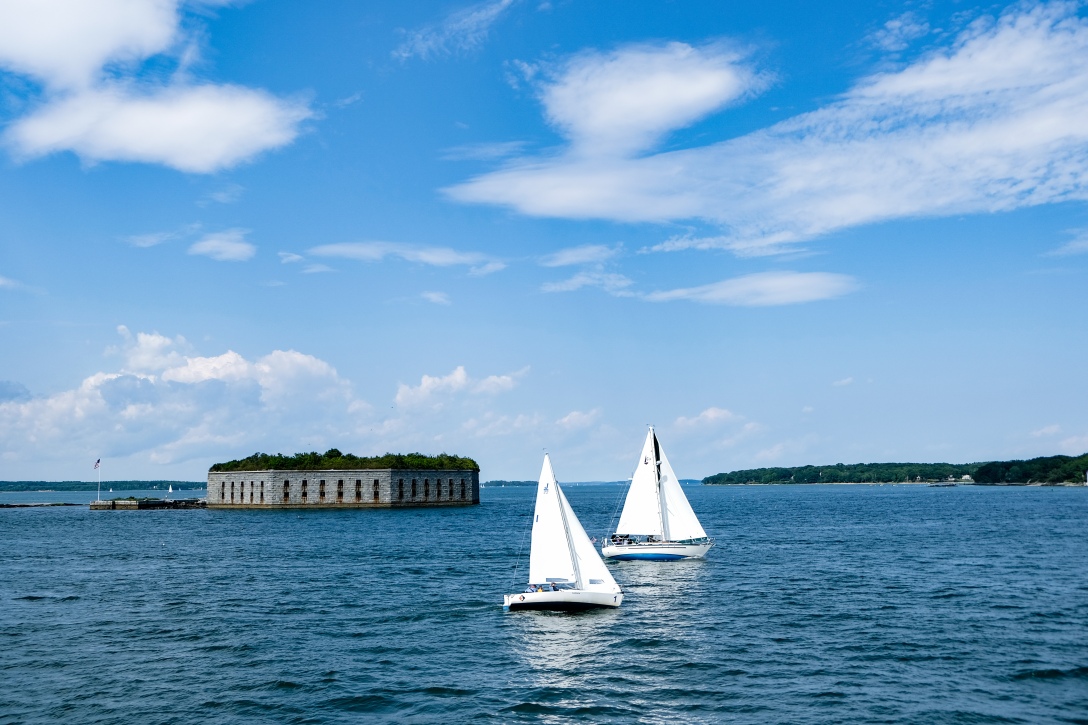 We moved to Portland! Well, at least for the month of August. We made it in late Friday night after the actual most dramatic afternoon of trying to capture the bears. 5 hours of pure, unadulterated torture, complete with fire and urine. Story to come.

After sleeping in on Saturday, we decided to go out for breakfast.  It was raining and hotter than Hades and places in Portland don’t have air conditioning *blink* because heat waves like this are relatively rare. We started our morning at The Bayou Kitchen, and after putting in our name, stopped in at the local (air conditioned) art store. A cool 15 minutes later, the hostess at The Bayou Kitchen called to tell us our table was ready. D and I both got breakfast sandwiches with spinach and tomatoes; I chose bacon with a side of rice&beans and he chose andouille sausage with a side of home fries.  They were served PIPING HOT and on a day that was only a little bit cooler they would have been PERFECT, but mine had me breaking out into a sweat.

Post-breakfast, we headed home and waited for a pause in the rain before going out for a run around Back Cove. It was our first proper run together in maybe three years and it felt so good to be doing one of our favorite things. We alternated between running and walking every quarter mile (the cove is really well marked!) which is what I need to do to ease my knee back into things. I can already tell that my lower joints are going to be squeaky but I feel ready to train properly for the first time since the accident.

After showers we went to the grocery store before a visit from my in-laws. They stopped by with cookies and granola from Big Sky Bread Company which was on point!

D and I had plans to go bowling Saturday evening but I was so wiped out after the run that we stayed home to play with the bears and order Grubhub. 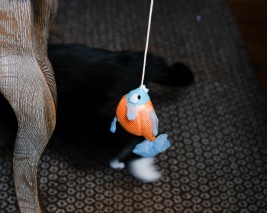 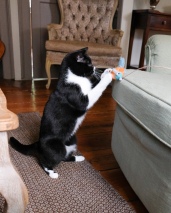 On Sunday morning we took the 9:15 ferry from Portland to Peak’s Island for a half day of kayaking with Maine Island Kayak. We got off the ferry at 9:45, hit the public library for a bathroom break, and were on the water by maybe 10:15-10:20ish after handling the procedural “shtuff” involved in a tour like this. 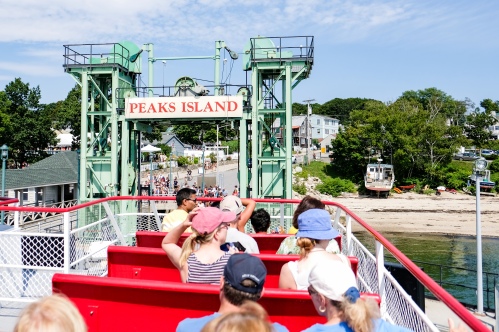 The ferry pier on Peak’s Island.

Maine Island Kayak – just the the left of the ferry pier. Joe was waiting for us, paddle in hand, when we got off the ferry. 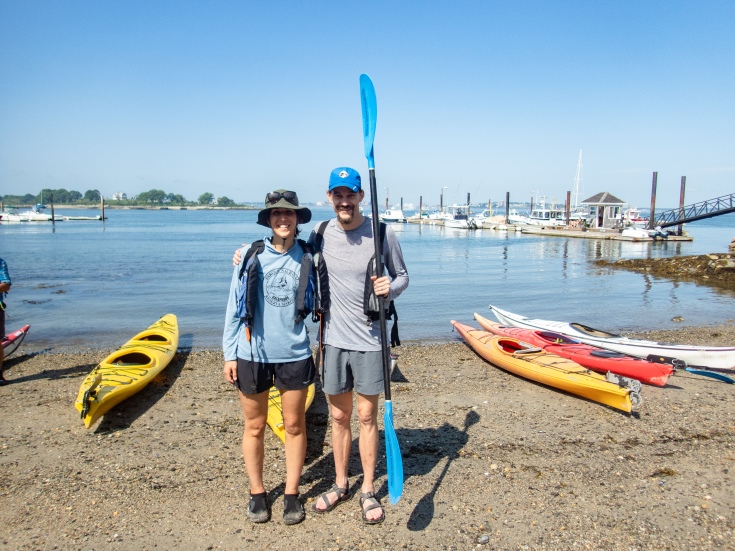 There were four couples – three of us celebrating our anniversaries! – of varying skill levels.  The company’s owner, Joe, was a FABULOUS tour guide, and upgraded D’s kayak to something more suited to his skill level.  D and I expressed an interest in history and birding and Joe made a point to talk to us individually about each.

Our first stop was a wreck off the coast of Diamond Island where there was an osprey’s nest, Eider ducks, and a slew of cormorants.  I decided to be the last person paddling through the wreck because I wanted to have time to take photos.  Unlike the fauna on my recent trip to the Galapagos Islands, these birds were incredibly skittish.   I didn’t take that into account and by the time I was paddling through, all but one of the maybe eleven cormorants that had been drying off their wings had hopped back in the water to get away from our flotilla. 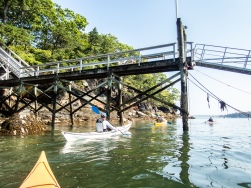 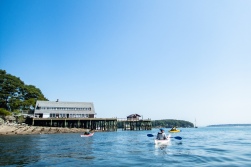 After the wreck, we headed back towards Portland and the Civil War era Fort Gorges.  You guys this place is SO COOL.  We paddled past a slew of gulls and cormorants to pull our kayaks up onto a beach.  Joe gave us some safety recommendations (it’s dark inside and if you can’t see the floor, there probably isn’t one) and then we set off while he stayed with the boats.  The stonework is incredible and we could see the tracks that the soldiers installed for the canons.  We climbed the pitch black stairs – using our camera flash for light – to the top and were rewarded with a clear view of the harbor. After half an hour of exploring we got back on the water. 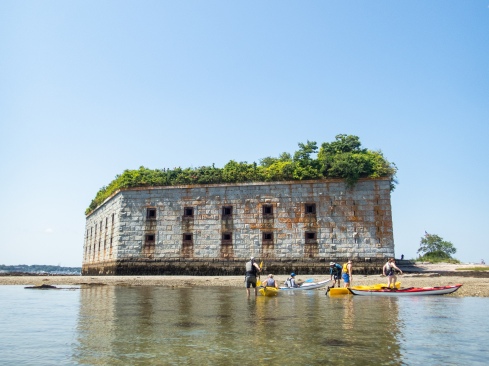 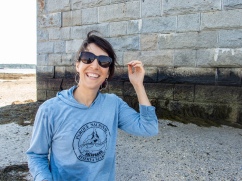 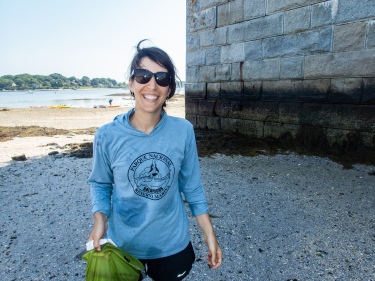 We kayaked to House Island and then across to Peak’s Island before paddling down the shoreline back to Maine Island Kayak.

We pulled our kayaks ashore, picked up our valuables, and said goodbye to Joe before searching out a lunch spot.  We put our name in at the Cockeyed Gull – Joe’s recommendation – and Shipyard Brewing Co and then wandered around to pass the time while we hungrily awaited a table, ultimately choosing the Cockeyed Gull. We split fish and chips and the grilled scallops, and I devoured the watermelon (with wasabi dressing!!!) salad. Wasabi, and all things horseradish, is one of my favorite flavors and my absolute favorite spice! 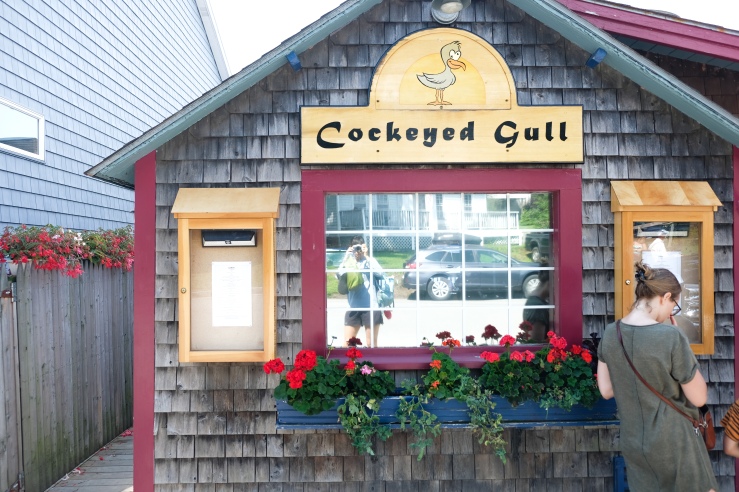 We finished lunch just in time to catch the 2:45 ferry.  We got great seats on the way back and the view pulling into Portland’s ferry terminal was perfect!  After landing we went to Shipyard’s tasting room.  They had fun beers and sodas available for tasting, but the tasting room was in the back of the space, behind the gift store, and completely windowless. 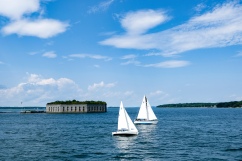 We stopped at a corner grocery store for dinner supplies before hopping in the car and heading back to the bears.  We have a few more kayak outings planned for the month and this has me eager to get back out on the water!